Nelson: I’m curious about your notion of the anti-poetic. What does that look like for you? Is that the everyday diction, the pop-culture allusions, the sense of it being so very much of the contemporary world?

Balzer: Yes. And I worry about those things because, I guess, it’s an evaluation of my own life, which does contain a lot of the pop-culture material and detritus that piles up onto everyday experience. And what’s poetic in that? I feel like I lead a very anti-poetic life. I have to work. I’m not a teacher of poetry. Poetry doesn’t have a day-to-day resonance in my life. Poetry is often very absent from my life. So I was trying to figure out how to marry day-to-day life with the poetic. I was trying to bring poetry back in. So the anti-poetic is my attempt to access what was really poetic for me. And it involves a lot from pop culture. I had to figure out how pop culture separates, or doesn’t, from my existence. I had to figure out how it diminishes my existence while I have a craving for it.
Read Stephanie Balzer's entire interview with poet Christopher Nelson here.
Posted by CUE Editions at 8:25 AM 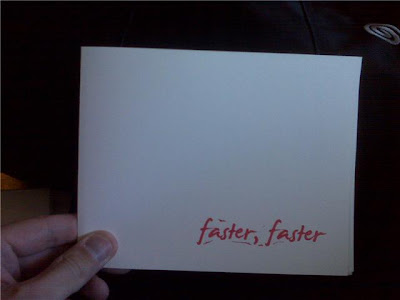 I read that time passes through people though people believe they are passing through time. Those who are melancholy write from memory but those who are happy, imagination. All surrealists are happy. An MRI can detect if you are madly in love and freshly rejected, the blood nourishing the obsessive-compulsive brain. An MRI can detect if you’re a surrealist. The door handle of your truck, locked: the penny taped to your window, still: the light in your bedroom window, late. Television is a writer’s medium, film a director’s. David Chase thinks The Sopranos is a failure and Norman Mailer the closest thing to the great American novel of today. Beloveds, we live in an age of diminished returns and empathize with Tony’s malaise. “I watch all this fighting, you know,” Sommer emailed, “and these fighters work their asses off. they say things like ‘if you want it you can get it’ as if that is utter truth.” Mike said he’s not going for happiness anymore, only contentment. I heard that attorneys tell illegal immigrants not to drive or even get in cars in case they’re stopped for traffic violations and deported. Barbara said it’s like we’re all ex-patriots now living in our own country. Those with the least power hold access to the purest truth—sounds like Jesus but I’m paraphrasing Bill Moyers. I confess: my state of mind is America. “something to do w entropy, i think. the force of nothingness so much stronger than its opposite.”

We always wanted CUE to showcase a large number of poems by a relatively small number of writers, so the side step to chapbooking seemed like a natural development in the growth of CUE. The idea is to save overhead by moving online, use a fraction of the previous print budget to publish one-of-a-kind chapbooks, and then to turn around and use our wider web presence to create a readership for the chapbooks, which, hopefully, will begin to pay for their own production. It’s not an original model for expansion, but it’s one that I think allows us to keep one foot in the print world. While we haven’t gotten production completely off the ground, when we do the hope is to put out 3–4 chapbooks a year.
Posted by CUE Editions at 6:29 PM

After some delay, the ball is rolling on Stephanie Balzer's chapbook, faster, faster. We're hoping to get it out some time in July. For now, a few of Steph's poems:

Once, art, morality and truth were contained within religion. Beauty and intelligence, synonymous. We ate at the Pink Taco and then went to the bookstore to buy Female Chauvinist Pigs—get it? And I might have been wearing a thong. In the book group everyone introduced themselves by their names and how they identify; I said I identify as a writer and Audrey said “in bed.” I read the sunset is still a principal metaphor for transcendence, light glinting off crystalline particulates of airborne salt and sand. Sure, you looked hot on a motorcycle at sunset. Beloveds, a heart can physically ache when it’s metaphorically broken. Science loves accidents. I remember learning that airplane wings don’t freeze because of dry ice—a discovery made by accident. “Quickly ... cool these wings!” Now we’ve learned that states are either blue or red, but some already knew this about geography: once the Berlin Wall fell, Coca-Cola infiltrated the blue territory that Pepsi had dominated for years. Some thanked God for giving Coke this chance. But back to the heart.

~
A cunt-hair away from perfection, Deadwood, a Zen-like transformation of consciousness—but I know as much about Zen as David Milch does opera. Nothing. Or next to it. Once Li-Young Lee said writing is yogic, but I quit yoga, too. People hold themselves to higher moral standards when they feel they’re being watched, even by eyes that are fake; but do the words eye eye have the same effect? What makes “cunt” the most offensive word? A “c” a “u” an “n” and a “t” that signify the last frontier of American language Milch is forging as though Swearengen himself. Writing into the sunset—get it? I looked up my family history—my great great-uncle Ebenezer was a blacksmith, and another, J.P. Hoy, a detective in Minneapolis who solved the famed case of the murdered dressmaker. One obituary spoke of surviving life among the “savages”... the savages of South Dakota. My great-grandfather owned a hardware store in Revillo in the late 1800s that looked just like Seth and Sol’s, which reminds me of when I saw James Gandolfini on TV in the crowd at the Macy’s Thanksgiving Day Parade smiling nothing like Tony Soprano. A wet snow fell. Men dressed as inflatable, jolly elephants strutted to commemorate the first parade 80 years ago when real elephants marched. The unredeemable bookended by sentimentality; that’s what Barbara said about Tony.

A brown dove in the pine tree. On a post-it taped to my computer I’ve written: “Wait for the wisest of all counselors, time.” Some days I read it and think about you, and others about how the object falls as the last word in the sentence, offset by a comma. For a week I carried in my purse the transcript downloaded off the Internet and authenticated with a stamp, GOVERNMENT EXHIBIT P20056T01-445-A. I couldn’t stop thinking about the last “No.”—how it’s mispunctuated, ending that way. . . . . . . . . . . . . . . . . . . . . . . . . I forget who but a Times critic wrote pejoratively about a poet for “exhibiting infinite faith in language.” Is the offense “infinite” or “faith”? I’m not seriously asking, just letting the abstracts burn out like hot coals. My house, silent. In San Diego over coffee we talked about Nabakov’s synesthesia, metaphor and the brain’s hard wiring. We used “the buttery sun” and discussed how sufferers are overwhelmed by malls. My teacher Frank didn’t understand poets who wrote about malls; I wrote about childhood and the ocean. When I told Morgan I wanted a monkey in this one, he said what about the ape in 2001: A Space Odyssey who throws up a bone. I though he meant vomit. Wendy took a picture in Costa Rica of three monkey skulls lined up on a picnic table: the monkeys starved because too much rain caused the fruit to rot.
Posted by CUE Editions at 9:22 PM

If you haven't picked up a limited edition copy of Mark Horosky's Let It Be Nearby, now is the time. Only 30 copies left, and we ain't makin' more.

On deck: Stephanie Balzer.
Posted by CUE Editions at 5:04 PM

Now Available from CUE Editions--Mark Horosky's Let It Be Nearby 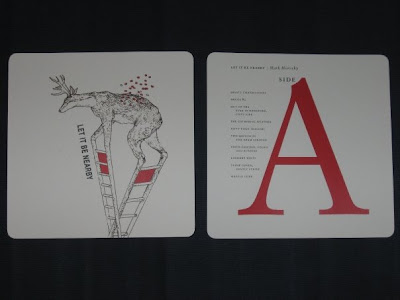 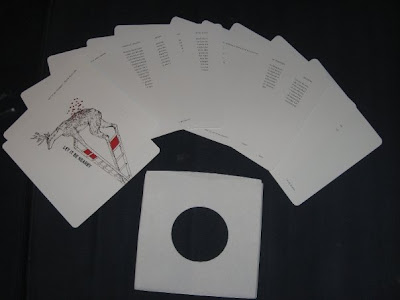 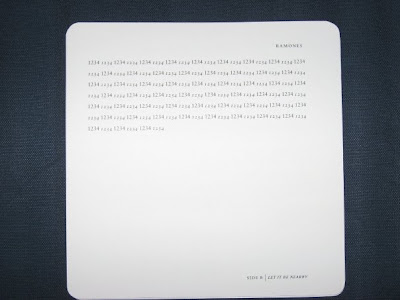 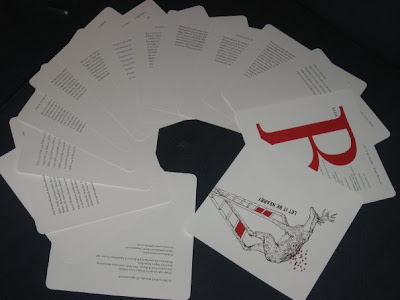 Let It Be Nearby (CUE Editions, 2008), Mark Horosky's debut collection w/ cover(s) art by Amie Robinson is now available in a limited edition of 100 chapbooks. LIBN is printed on 15 unbound 6 3/4" x 6 3/4 " chap-cards that have both a Side A and Side B. Chaps come in four different colors (red / mustard / blue / teal) and are slipped inside a 7" paper record sleeve.
Posted by CUE Editions at 1:24 PM

Mark Horosky's Let It Be Nearby 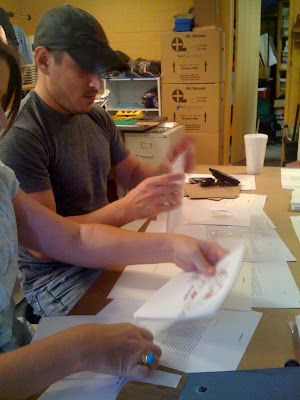 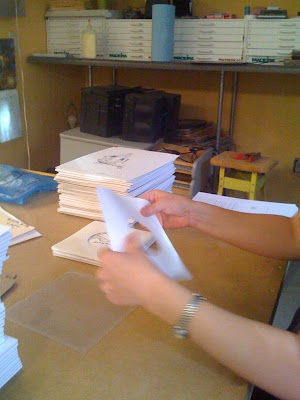 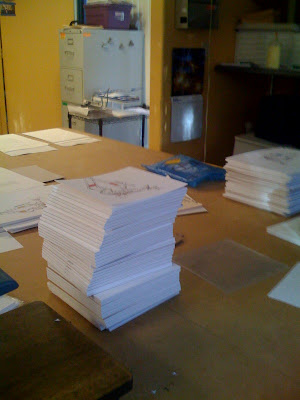 CUE Editions' inaugural chapbook, Mark Horosky's Let It Be Nearby (in a limited edition of 100 copies), is finished and will have its debut Friday, December 5 at Sommer Browning's Multifarious Array reading at Pete's Candy Store in Williamsburg, Brooklyn. If you can't make the Brooklyn reading, you'll be able to purchase a copy of LIBN via Pay-Pal. Check back here in a few weeks for more information.
Posted by CUE Editions at 6:41 AM 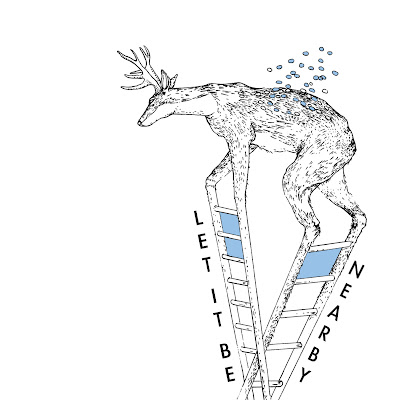 Rules and Regulations at the New York Public Library
No sexual acts. No sitting or standing idly about, sleeping, or lingering aimlessly. Mutilating, damaging, or defacing any book, map, picture, engraving, film, manuscript, cassette is prohibited. So is the use on library premises of alcohol, narcotics, or hallucinogens. No display or use of weapons. No smoking. No obscene and/or abusive language or gestures. Shoes must be worn. No playing radios; the use of portable television sets is prohibited. No cameras, typewriters, cellular telephones. Talking is permitted, but only in quiet tones and low voices. No behavior leading to the suspicion of intoxication. All briefcases, oversized handbags, notebooks, carry-alls, overcoats, luggage, packages, and shopping bags are subject to inspection by security. No soliciting staff. Infested clothing or unpleasant body odor is unacceptable. Animals are not permitted in library buildings.

-Mark Horosky
forthcoming in Let It Be Nearby
Posted by CUE Editions at 7:00 PM

CUE Editions is proud to announce that Mark Horosky's Let It Be Nearby will be the first book in our new chapbook series.
Posted by CUE Editions at 11:15 PM

Back Issues of CUE: A Journal of Prose Poetry